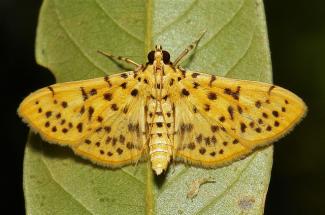 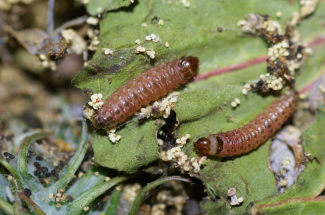 The larva bores into the central core of the pseudostems resulting in the death of the central spindle causing “dead heart” symptom.

Larva feeds on seeds rendering them empty and prominent holes.

Early stage of the larva bores the unopened leaf buds and feeds on the leaf tissue.

Feed on immature capsules and the young seeds inside rendering the capsules empty.

Late stage larvae bore the pseudostem and feed on the central core of the stem resulting in drying of the terminal leaf and thus produce characteristic ‘dead heart’ symptom.

Oozing out of frass material at the point of tunnelling is the indication for the presence of larva inside the plant parts.

The incidence of this pest is noticed throughout the year but they occur in enormous number in four periods, December-January, March-April, May-June and September-October and their abundance synchronizes with the panicle production, fruit formation and new tiller production.

Jethro ported to Drupal by DropThemes.in